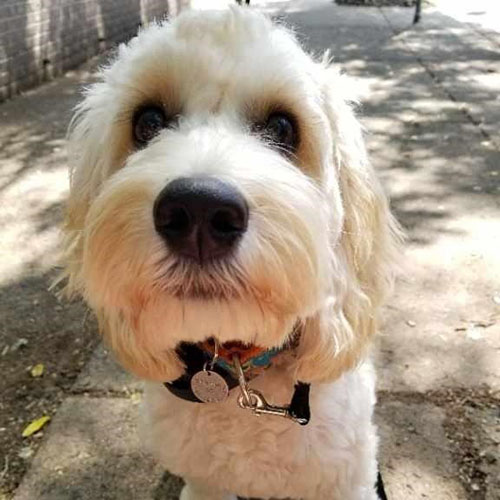 Stanley has been doing AWESOME and we are so so so thankful for all your help. Please feel free to use the following as a testimonial on your site:

We are SO lucky to have found Christine.

When my boyfriend and I brought our new puppy Stanley home, we instantly fell in love. He was playful, affectionate, and eager to please – everything we could have asked for. Suffice to say, we were stunned when just a week later, he was growling and baring teeth at us over a bone. We figured the solution was simple – we would no longer allow him to have bones. But as the weeks passed, he began to guard more and more items – tissues, food wrappers, socks, and even twigs outside. The growling and snarling had escalated into full blown biting, which in turn, had become more frequent and severe. We enlisted the help of a highly recommended trainer, who assured us that with positive reinforcement and a bit of counterconditioning, Stanley’s resource guarding could be cured. But after weeks of lessons, his behavior had only worsened. Our best bet, we were told, would be to keep a basket muzzle on him at all times. Dissatisfied with the response, we sought out another trainer. But the results were the same, and the prognosis was just as grim.

Devastated and dejected, we made ourselves a promise to give it one last try. After reading through the testimonials on Christine’s site, we scheduled an appointment. Over the course of just a single session, Stanley’s behavior had improved dramatically. What Christine helped us to realize – that others had not – was that the root of Stanley’s aggression was his insecurity, and that the basis for change would have to start with us. She explained, step by step, how to become the type of leader our dog needed – attentive, aware, calm, patient, and confident. Over time, we have continued to earn Stanley’s respect, and our relationship with him is as strong as ever. I am thrilled to report that Stanley has not had a resource guarding incident in months! He’s the sweetest, friendliest, most spirited little guy! We adore him.

Christine, thank you again so much for everything you have done for us. A few months ago, we had no idea how we could continue to live with a dog like Stanley. Now, we absolutely cannot imagine our lives without him.